The Juniper my mum bought me here: http://dj-bonsai.blogspot.co.uk/2014/01/needle-juniper-new-year-new-tree.html

It had progressed well and filled back out, showing very good health so back in January I decided that it was time to remove the wire to settle it for the coming season. I have only scissor pinched it during the year, removing the tips of trios of new shoots to promote back budding, but letting it fill out well...

And here it was just before the wire was all removed 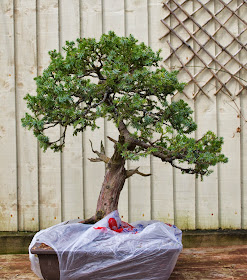 Note the carrier bag - a great way to stop all of the wire clippings mixing with the substrate and becoming very difficult to gather.

All in all it was a pretty pleasing result after just one year - the basic branches had set, the silhouette
was there for forming an inkling of the future image and now I could work on finer wiring, trimming, removing...to build ramification ...a process I expect to take a good few years to bear fruit.

With Squamatas, you have to approach trimming differently to other junipers if you want to truly define the pads. Dieback of needles causing ugly browning and lack of back budding occurs when no light is present, so due to the growing habits of this tree it's a fundamental concern. Even this years growth can block enough light to force the tips to push wide and long if not properly managed

So to begin the process of refinement of pads, to build and force buds to appear in this and last years growth areas, and to prevent the tree from growing ever bigger; first you need to take every single growth extension, and trim back all but the current years growth, to around 6-10 sets of needles, dependent on the energy of the area in question.

Below you can see a typical branch end with multiple extensions.

Note how, similar to some pines, the needles cling on to the shoots, year by year, eventually browing - imagine wiring this and hoping for adventitious buds - this years growth is clearly visible as the needles are much longer and fatter, but the branchlet still clings on to the older growth, making new bud growth difficult as it blocks out the light: 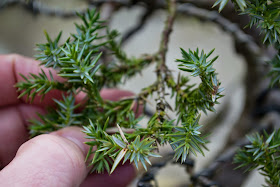 What we need to do to promote budding behind the new growth is clear off the old needles - with a sharp pair of scissors, a good eye, and a bucketload of patience....


Here is the same extension, with a stripped branch to the exact right of my thumbnail, cleared of last years growth, by clipping off each needle, one by one, taking extra care to avoid cutting off existing new buds 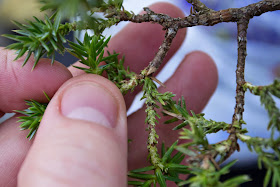 Note how precise you have to be to remove the needles and stop from clipping off those ever so important back buds....my forefinger highlights such a bud in the pic below after a long and careful stripping session: 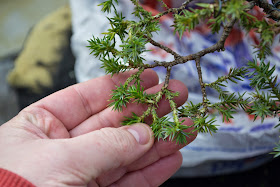 You can wire these without taking such an approach but the end result is coarse, unstructured pads, and ultimately, a disappointing image....

The left section below has been prepared for detail wiring below, while the right half is as it was after last year's rough wiring, awaiting attention: I set about stripping back the whole tree of last year's growth, leaving all the new growing tips and current needles to ensure ongoing health, but leaving enough shoot stripped of old growth to allow light in for budding and a clearer simpler branch to wire... Here's how the whole tree looked after 8 hours non stop stripping: 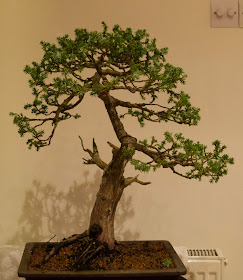 Less than 5% of this years growth was removed in the process - I just removed last years and older browning foliage which was already shrinking and receding.

From the pic above it seems that the apex is dominant, but from this pic below, taken from above the tree you can see that the spread of growth is fairly uniform now that I've cleared out the crap: 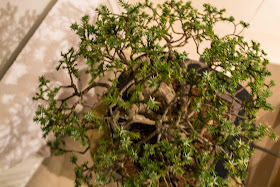 What we are doing here is leaving the foliage that the tree is investing energy in developing - to retain vigour, while clearing a space for light to help dormant buds to develop when we start to remove dominant shoots later on. 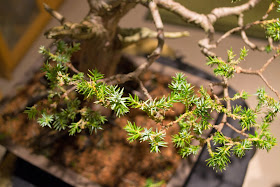 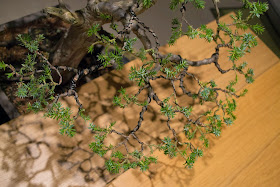 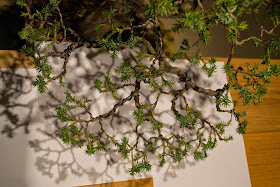 With this species, light is everything...the slightest overhang will cause browning and dieback of the pad below, so placement of stripped extensions is critical.

Here's a  3/4 profile of the lower right branch: 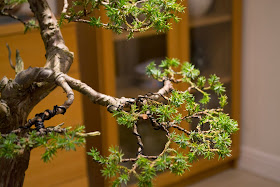 and a full frontal: 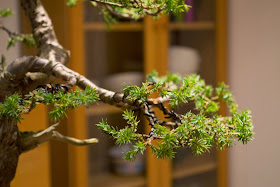 You can see how thinly I've laid it out - this is the same pad I showed wired, two pics above.

Lots of space to bring the upper parts of the canopy down in space behind it, therefore giving it maximum chance to fill out fully...

I've had a little wine, and have too little time to continue so I'll bid you goodnight and thanks for reading.....I'll continue this session in a later post